This year I curated the Aboriginal inclusion for an exhibition in Japan.
Boomalli Cooperative members were invited to exhibit in the 18th JAALA International Art Exhibition at the Tokyo Metropolitan Art Museum in Japan, August 2012. A partnership between JAALA, cyberTribe and Boomalli realised the inclusion of Aboriginal artworks, for the first time in the history of the long-running JAALA Biennale.
The acronym JAALA stands for Japan, Asian, African and Latin American Artists Association. Founded in 1978, with the inaugural exhibition titled "reinstatement of man and nature" at the Metropolitan Art Museum, JAALA included countries such as Palestine, China, Korea, Philippines, Thailand, Bangladesh, Iran, Iraq, Kurdistan, Pakistan, Kenya and others.  The 2012 JAALA Biennial included a new focus on other countries: South Korea, China, Kurdistan, Taiwan and Aboriginal Australia.
Heres what I wrote in August for our inclusion in the upcoming catalogue for JAALA 2012:
It is an honour and privilege for Aboriginal and Torres Strait Islander artists to be invited to exhibit in Japan for the first time in the history of the JAALA International Art Exhibition.   The partnership between JAALA, Boomalli and cyberTribe has realised the exchange of goodwill and awareness-raising for all of our cultures.
There are many entry points for engagement with the JAALA curatorial themes. The major issues that the Indigenous artists have focused on are the oppression of our people, and also questioning the governments use of art as propaganda. It is interesting that the all of the artists have chosen to maintain a positive stance, responding with artworks about healing and cultural adaptation, which is a strong testimony to Aboriginal resilience.
Boomalli Aboriginal Artists Co-operative is one of Australia's longest running Aboriginal owned and operated art galleries. Established in Sydney in 1987, Boomalli, a word derived from three different Aboriginal language groups, means: “To strike; to make a mark”. Boomalli has seen hard times in recent years, but will make a mark for its 25th anniversary in many ways in 2012 and exhibiting in Japan is a really important extension of the community program.
cyberTribe is an unfunded artist-run initiative with a focus as an online gallery but makes use of opportunities in other gallery spaces and places for Indigenous Artists locally and Internationally. The online gallery space is part archive, part gallery, part museum and part publisher, founded over a decade ago.
The artists exhibiting in the 2012 JAALA International Art Exhibition are Bronwyn Bancroft, Michelle Blakeney, Nicole Boeree, Jason Davidson, Charmaine Davis, Jenny Fraser, Danielle Gorogo, Kim Healey, Wayne Quilliam and Graham Toomey.
The strength of the JAALA International Art Exhibition is in acknowledging the power of creativity and investing energy to spread the network and communicate across borders. Hopefully JAALA will continue with the inclusive dialogue to foster artistic responses from artists representing Indigenous cultures and other groups, locally and around the world.
Jenny Fraser 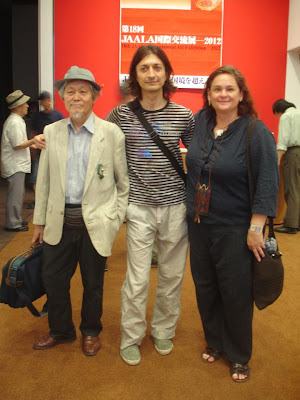 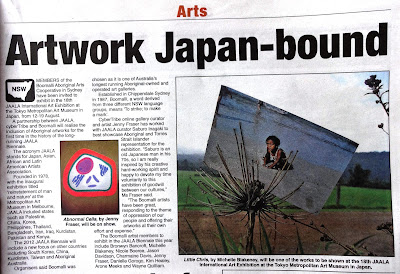 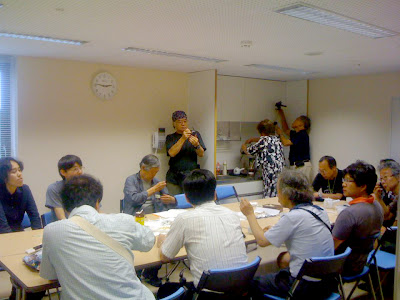 at one of the JAALA artists roundtable discussions, Tokyo Metropolitan Museum 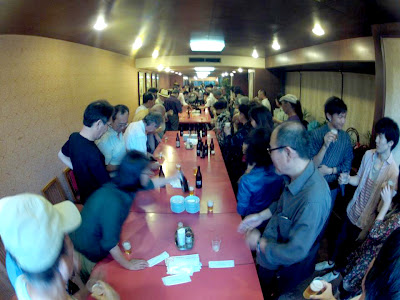 at the JAALA Opening Ceremony party. a view of the Tokyo Metropolitan Art Museum courtyard. 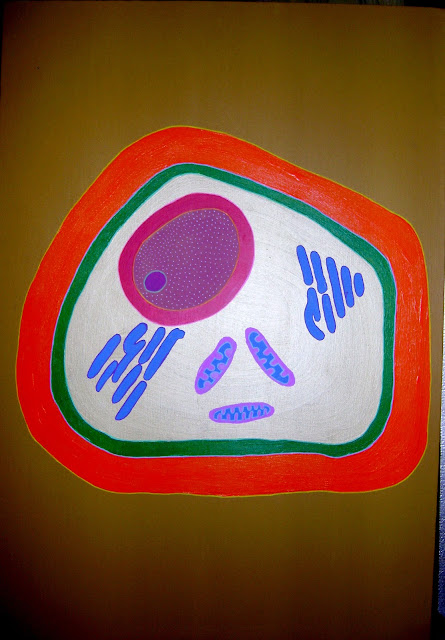 my artwork in the JAALA exhibition 'Abonormal Cells':
Abnormal Cells features Eukarote Cells which are common in all living creatures: plants, animals and humans, and are therefore known as the building blocks of life. Once damaged by the likes of Yellow Cake Uranium, cells are mutated, never to be the same. This idea is explored through an attempt at painting notions of toxicity.

The Series was produced for the exhibition 'The Creative Cell of Life' which was an Art/Science response to the following quote:

“She gave birth unto the first female of life of flash and blood, the mould and pattern for all the mothers of the Earth. She endowed her Infant Female Child with faculties and powers to conceive just what the human race is today.”
David Unaipon
Native Legends

Through research, documentation and production, this project will demonstrate how utilising the potential of the “Healing Arts” highlights the processes and issues regarding the Wellbeing of Aboriginal practitioners and others. Making art and putting a high value on storytelling as a way of bringing cultural values into the mainstream, is a holistic approach to wellbeing as well as a way of participating in society and having a voice.